There’s lots of great things about living in Seattle proper, and one of the best things is that Seattle’s an eminently walkable city. Downtown’s just a quick stroll away from Stadium Place, but we think that to get the most out of your urban walk, a jaunt down the Waterfront is your way to go. So put on some comfortable shoes, and let’s do this!

This is not a complicated route, you won’t even need to take notes. Just walk out your door and head down First Avenue until you hit Madison, then hang a left. Then take a right just before you go under the viaduct, and congrats! You’re now officially walking on the Elliott Bay Trail. 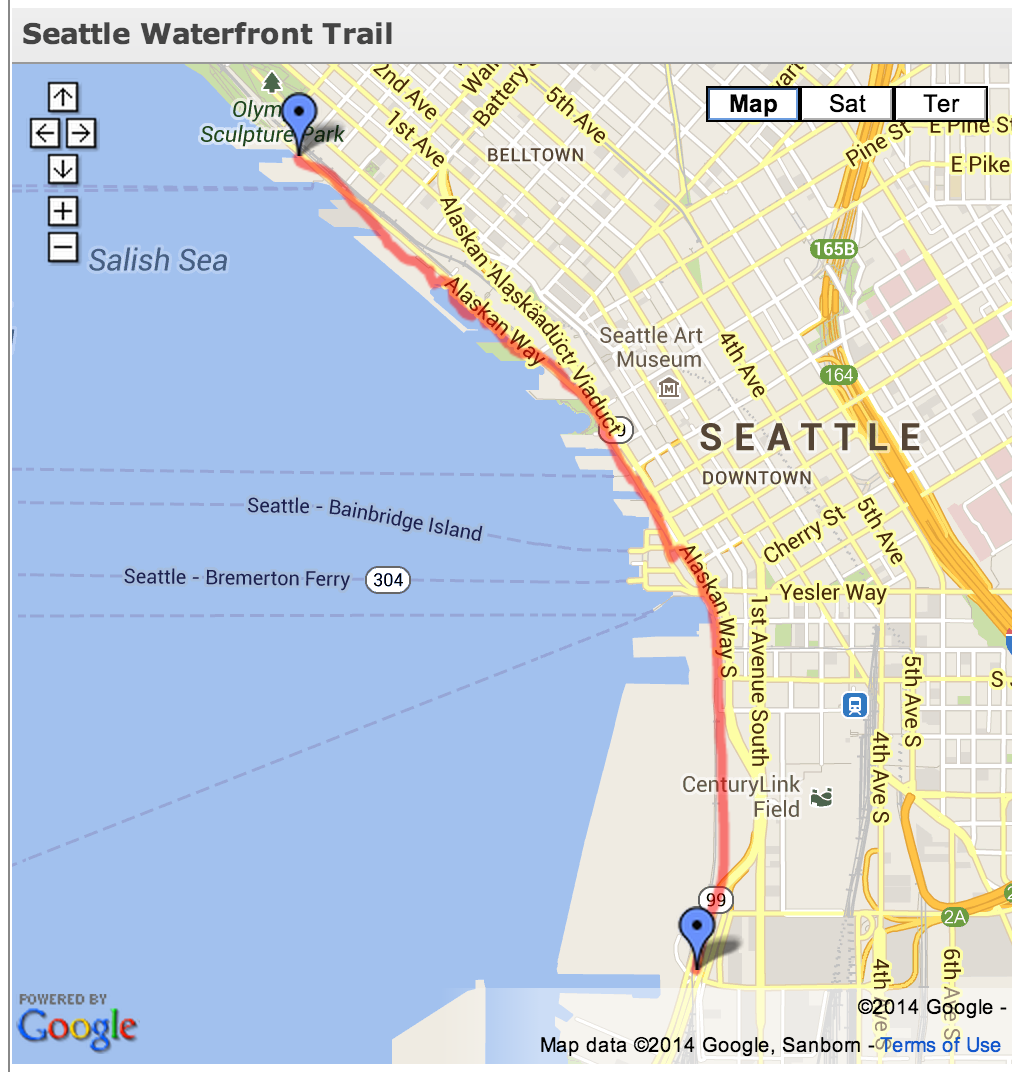 Not only is this trail flat (a lack of hills will always get positive reviews from us), it gives you some of the best scenery/people watching Seattle’s got to offer. Technically, this route will take you all the way to Interbay, but we like to stop and turn around once we hit the Olympic Sculpture Park (after we’ve walked around the park and gotten some culture first, of course). 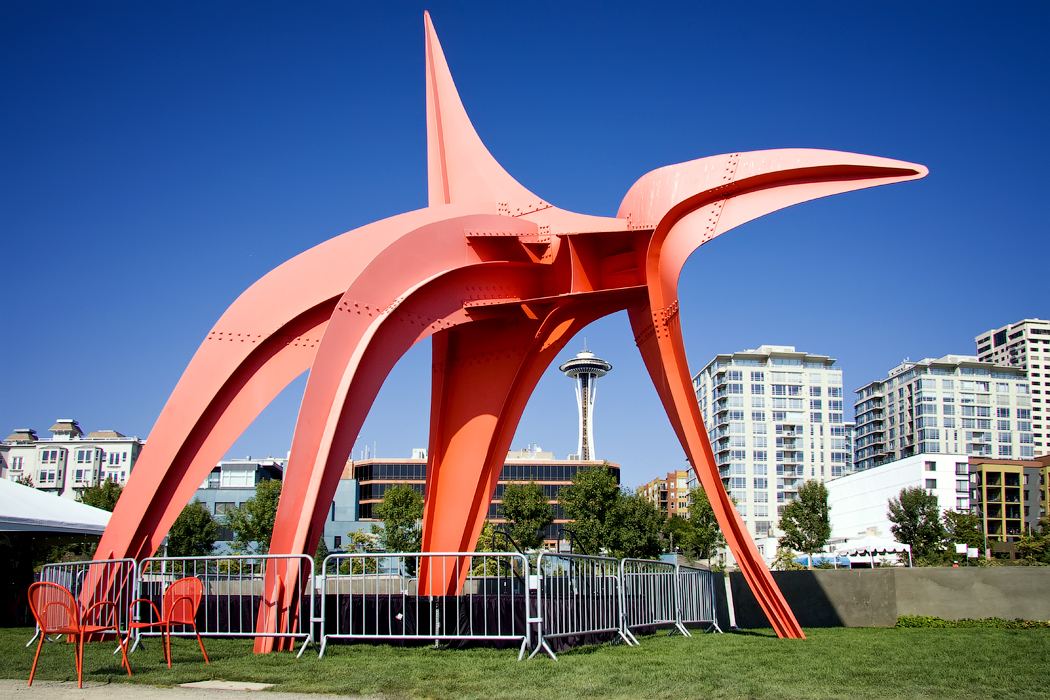 Sure, we get it. There’s a reason you live where you do. You’re a city person now.  An urban aficionado. You love tall buildings, ample mass transit, and having a coffee shop on every corner. You’re powered by the hustle and bustle that comes with living in a densely populated area.

But hey, even the most hardened city-dwellers among us need a little nature fix every now and then. Why not use this year’s Earth Day as an excuse to spend some time in the great outdoors?

We’re not suggesting any grueling nature hikes or anything (believe us, that’s the last thing we’d recommend). It’s possible for you to bond with nature within city limits- in fact, there’s a great place that’s just a short walk out your door.

Two blocks north of the Nolo, on 2nd and Main, you’ll find a patch of nature tucked right into the city: the Waterfall Garden Park. You’ll walk right past it if you aren’t looking for it, so keep your eyes open for the sign, and your ears open for the sound of rushing water. 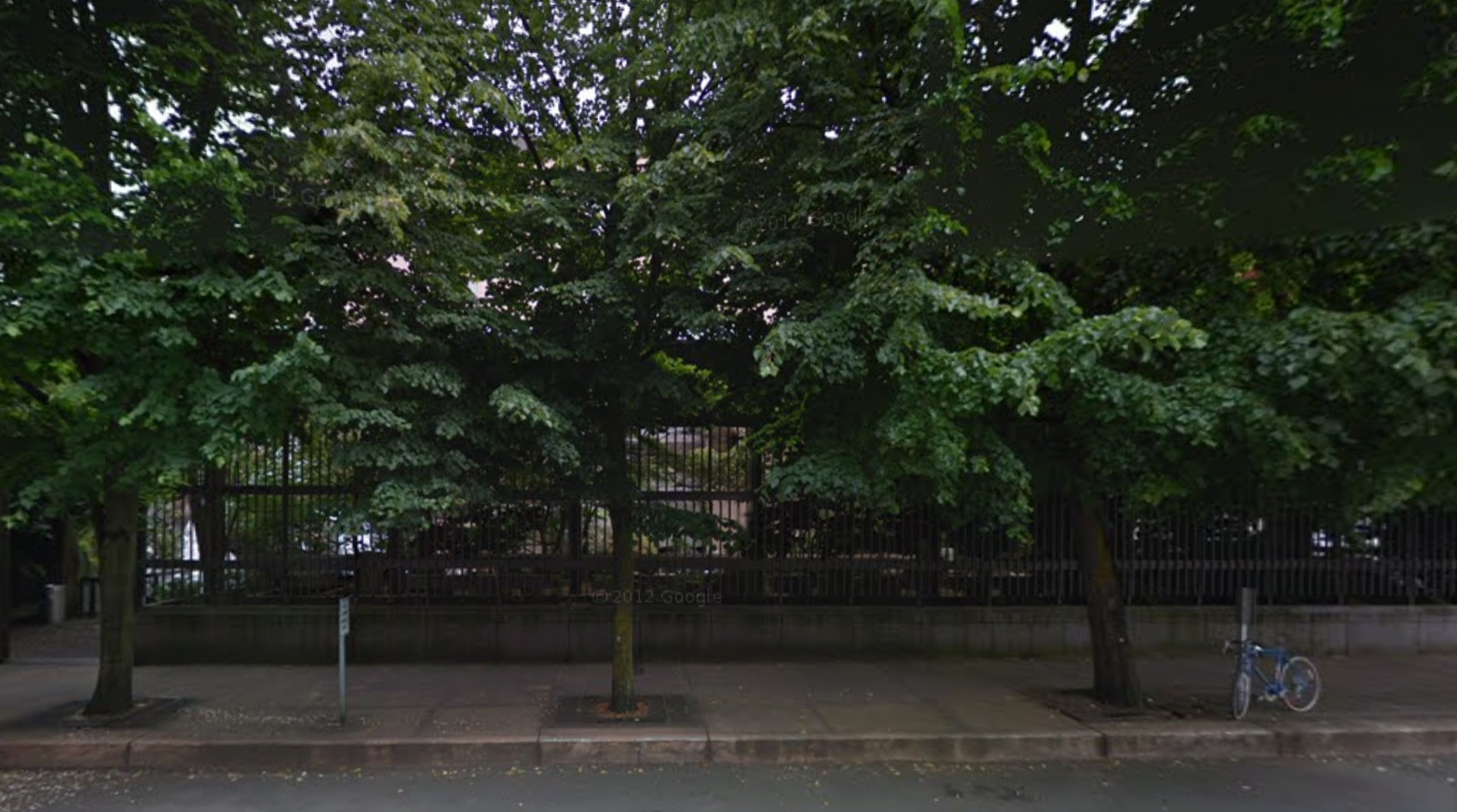 Seriously, we aren’t joking. This thing is hidden.

Fair warning: there’s a reason that this historical spot (where UPS- yes, that UPS was founded in 1907) is referred to as a “pocket park.”  It’s not huge. There’s just a few waterfalls, trees, chairs, and tables scattered around. Despite it’s size, it’s a perfect urban oasis. Pop in during your day to just relax, or act like a local and bring a lunch to enjoy. 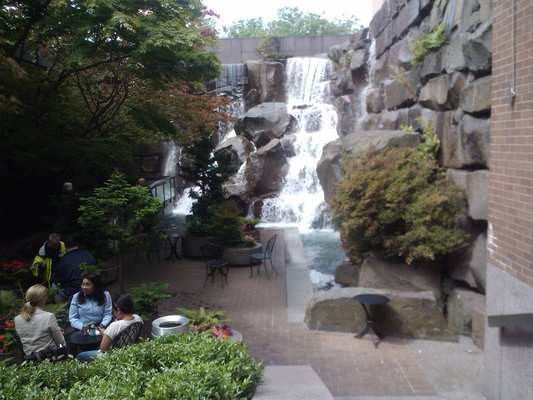 Photo via Wendy B. http://www.yelp.com/biz_photos/waterfall-garden-seattle?select=KPpBHBptLV72FRH8w8XjYw#vEP7ncvyW5VeVXTqpYCAUw

It’s not a whole lot of nature, but it’s just enough.

It’s tough to figure out what’s going on inside The London Plane at first. Is it a restaurant? Is it a larder/grocery?  Is it a bakery? Is it a wine shop? Is it a florist? Is it a classroom? The answer is yes. Yes, it is all of these things. 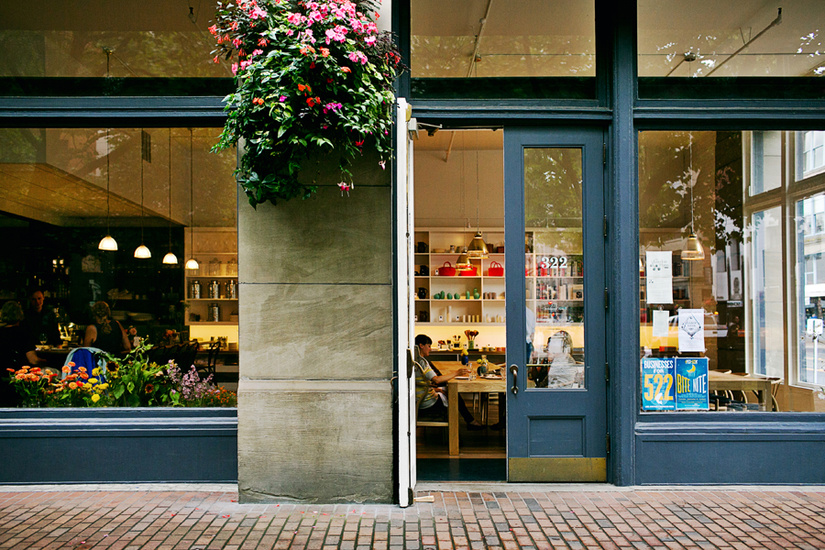 We’d be here for another three days if we dug super deep and explored every single thing that this place does well (hint: it’s basically everything), so instead, we’re going to take a look at a single section of their food menu.

It’s safe to say that Seattle’s right in the middle of egg season (just look in the seasonal aisle at your local grocery store if you don’t believe us), but we aren’t here talk about the Cadbury variety. We want to talk about that old school breakfast staple, and take a look at how The London Plane’s cooking them up right.

Hit this place up for breakfast, and there’s a good chance (no guarantees though, they’re always mixing it up) that a section of the menu is going to look like this:

All of these are rad. Seriously. You cannot go wrong picking any of these menu items. Our faith in the unwavering awesomeness of this place is so strong that once we ordered the soft boiled one with dukkah and we didn’t even know what dukkah was (FYI, they very politely explained to us that it’s an Egyptian mixture of herbs, nuts, and spices). 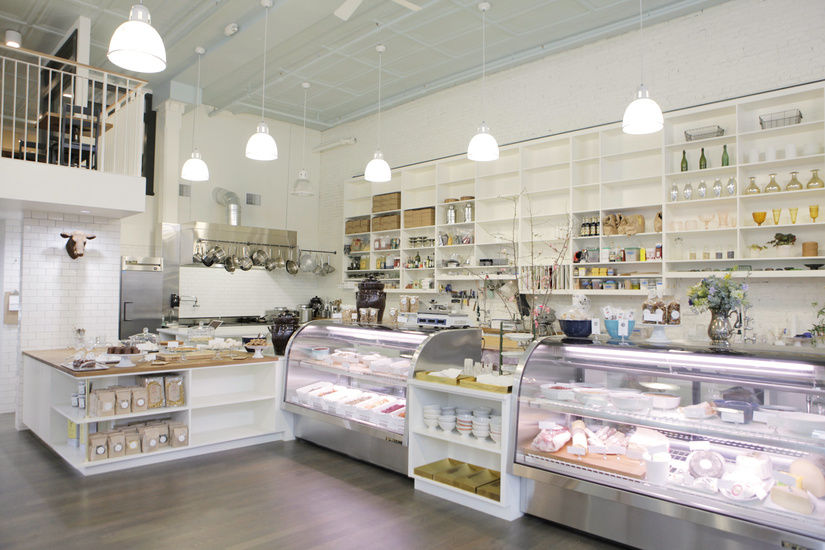 So here’s what you do to maximize your time/egg consumption at The London Plane. 1) Go to this place for breakfast and take a friend. 2) You order the eggs. 3) Make your friend order a pastry. 4) Mooch bites from their plate while you fiercely guard your own.

For the next few weeks, Seattle’s turning into a food-lover’s paradise. During April 6-10 and April 13-17, it’s Seattle Restaurant week! There’s never been a better time to head out and explore some of the great localicious options within walking distance of your neighborhood.

How does it work, you ask? It’s super simple. Go here and find the closest restaurants to your neighborhood participating. Then, go to that restaurant and select three courses from their special Restaurant Week menu for only $28.

This time around, there’s not a ton of strictly Stadium District options right near you, but don’t worry, there’s a ton just a short walk away. Here’s a few we think you’ll dig:

1. McCormick’s Fish House and Bar:  It doesn’t get more classic Northwest than it does at this venerable Seattle seafood institution.  There’s a reason this place has been around since 1912, and their Restaurant Week menu shows that reason off. 722 Fourth Ave. Seattle, WA 98104

2. Café Campagne – A quiet little bistro that wouldn’t be out of place on a busy Paris street has found a home in downtown Seattle, serving up classically awesome French cuisine. Check out their special menu and see what all the (well-deserved) fuss is about! 1600 Post Alley Seattle, Washington 98101 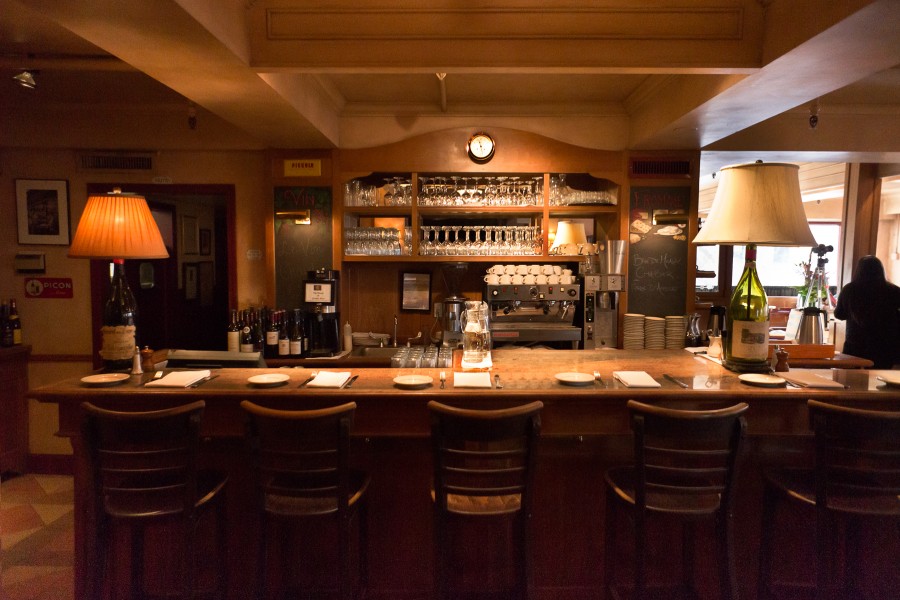 3. Lecosho – It’s hearty, it’s unique, and it’s secluded. Hit up this hidden Harbor Steps (it’s about halfway down the stairs) hideout for some of the best full-flavored dishes around. They’ve got some interesting options this Restaurant Week (especially at lunch!), so don’t miss out on your chance to give them a try. 89 University Street Seattle, WA 98101

Don’t limit yourself to just walking tours of Restaurant Week, either! Check out the full neighborhood list right here, hit the town, and let us know where else you’ve explored.

Summary: It’s the classic pre-game Mariners bar going back to the days of the Kingdome. Owner Mick McHugh is a Seattle legend, and you’ll often see him at the front desk greeting patrons. Vegetarians are the only people who don’t like their Prime Rib sandwich, and if you can’t find a scotch on the menu that you like, then you just aren’t trying. 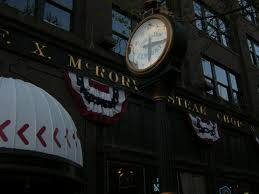 What Are Locals Saying? “We enjoyed the happy hour menu a lot before the Mariners game. Clam chowder was outstanding, Seattle garlic fries on point, and hummus delicious.”  – Via Richard K on Yelp.com.

Summary: You may know Fuel as that really loud and crazy place you walk by before Sounders games. Yes, it’s the official home of the Emerald City Supporters, but with tons of TV’s it’s also a place to watch all sports. Don’t let the soccer crazies scare you off. 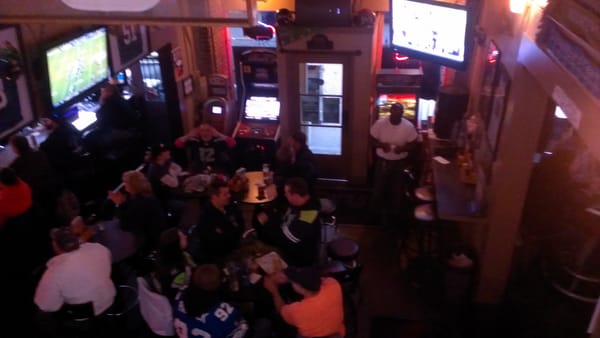 Via Michael C on Yelp.com

What Are Locals Saying? “Awesome sports bar with tv’s everywhere and great drink specials!” Via Kelly T on Yelp.com.

Summary: A newer entry to the Pioneer Square / SoDo scene, Henry’s is the closest bar to the Home Plate gate at Safeco. It’s a step upscale from your typical ballgame sports bars, and with plenty of TV’s and great food, it’s worth a visit for sure. 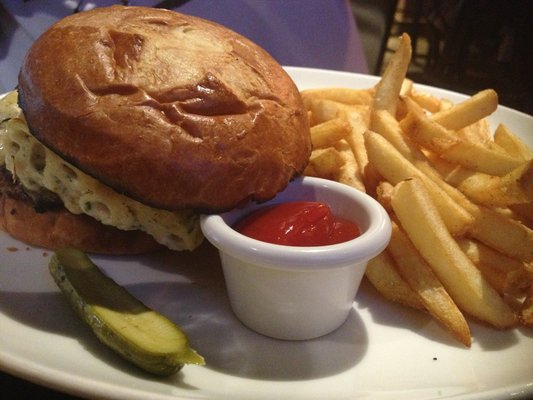 Photo via Rona L on Yelp.com

What Are Locals Saying? “I am still in love with Henry’s! Even though it say tavern they are super family friendly!!” – Via Alvean M on Yelp.com.

Summary: If you are looking for a diverse group of casual fans attending a game for the first time, Sluggers is not the place to go. The super skinny spot has booths that face more TV’s than you can count over the bar – all showing different games. If you are the kind of person who likes to watch eight games at once, Sluggers is your choice. 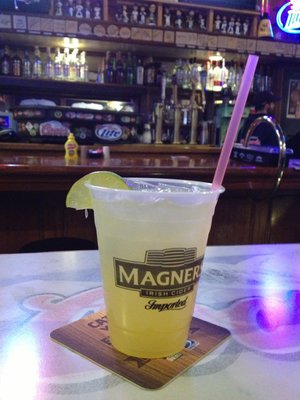 Photo Via Mo. M on Yelp.com

What Are Locals Saying? “This is THE place to be before, (during if you don’t have tix), and after any Seattle home game.” Via Nathan B on Yelp.com.

Summary: It’s a little hidden, but those in the know appreciate Temple Billiards for it’s pre-game pizzas and pool tables. It’s not a classic sports bar in that you will not be overloaded with LED’s. And while there’s always the chance for chaos and enthusiasm in the center of the bar, there are  plenty of spots to sneak away and enjoy conversation. 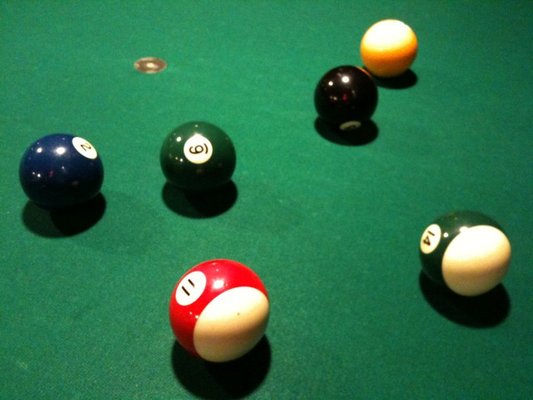 Photo Via JK on Yelp.com

What the Locals are Saying: “Great pool hall and sports bar right in the heart of Pioneer Square. I’d suggest coming here to watch a game and shoot some stick.” Via Michael C

Where is your favorite spot to watch the Mariners in Pioneer Square? Tell us your thoughts in the comments below.